Lichens contribute such beautiful colors to our redwood forests, growing elegantly on trees, fallen logs, and rocks. Each lichen you see is actually a symbiotic partnership — algae or cyanobacteria wrapped up in a fungal package. Thanks to canopy biologists Rikke Reese Næsborg, Cameron Williams, Marie Antoine, and Stephen Sillett, those of us on the ground now have a  window into the tremendous lichen diversity aloft in the redwood forest canopy! Below are a few close-up portraits and descriptions by Rikke Reese Næsborg of the amazing lichens found in the trees tops of Muir Woods National Monument during BioBlitz 2014. 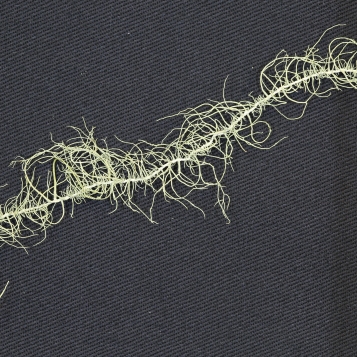 This is Methuselah’s Beard or old man’s beard (Usnea longissima), a lichen that only recently was documented in Marin County. It is rare in California, but is slightly more common in northern forests. The lichen consists of very long (up to 10 feet) strands with short even side branches and it festoons tree branches. It may have been the inspiration for tinsel on Christmas trees. 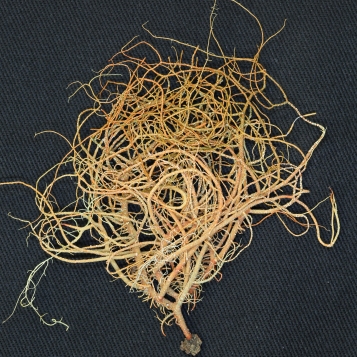 This is red beard lichen (Usnea rubicunda). Unlike the old man’s beard (pictured below), this lichen is more shrubby and more red in color. It is commonly found on branches of oaks and conifers in Pacific Northwest forests. 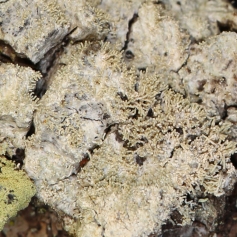 Loxosporopsis corallifera is only known from Alaska down to the coast of Northern California. With the discovery in Muri Woods, the known geographic range for this species may need to be expanded. It is a small lichen that is firmly attached to the bark and it consists of many small “spaghetti strands” called isidia that serve to disperse the lichen by breaking off and inhabiting new locations. 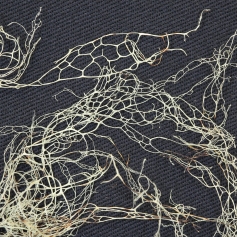 Lace lichen (Ramalina menziesii) is very appropriately named since its branches have net-like perforations. This greatly enhances the surface area and enables it to better absorb moisture and nutrients from the air. It is mainly found in the fog belt along the coast. It has been proposed as the state lichen of California, so it may soon obtain the same recognition as California poppy (state flower), black bear (state animal), and not least coast redwood (state tree). 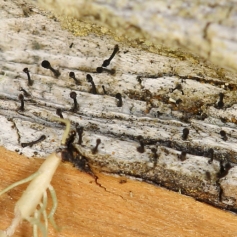 This is a pin lichen (Calicium abietinum) — a tiny lichen that has a powdery mass of spores on top of a stalk. You need a hand lens to really see them since they are only 0.02-0.03 inches tall. This species is fairly common, but other pin lichens are very rare and only found in old-growth forests, like Calicium sequoiae.